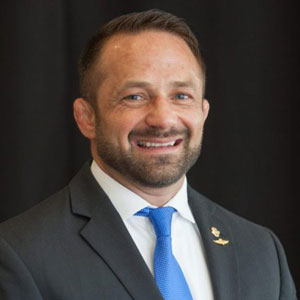 Chad M. Robichaux is the President and Founder (with his wife, Kathy) of the Mighty Oaks Foundation – a leading military non-profit serving the US Military active duty and veteran communities with peer-to-peer faith-based combat trauma programs and combat resiliency conferences. Chad and his team are dedicated to helping America’s military warriors and their families suffering from the “unseen wounds” of combat such as Post Traumatic Stress Disorder (PTSD). Their effort is aimed at reversing the climbing veteran suicide rate (20+ per day) and tragic divorce epidemic among military families. To date, the program boasts over 1,300 alumni and has reached tens of thousands of active duty service members through resiliency conferences.

A former Special Operations Force Recon Marine and DoD Contractor with eight deployments to Afghanistan as part of a Joint Special Operations Command (JSOC) Task Force, Chad is a widely sought after public speaker and subject matter expert on PTSD, military and veterans’ issues, providing counsel to the nation’s highest ranking flag officers and has advised the current presidential administration on the best and most-effective faith-based solutions for veteran’s care.

In addition to his military service, he has served as a Special Agent with the US Federal Air Marshal Service and the US State Department as a Surveillance Detection Senior Program Manager. Chad is also a Medal of Valor Recipient for his bravery beyond the call of duty in law enforcement.

Outside of his work with veterans, Chad teaches and trains Brazilian Jiu-Jitsu, is a 3rd degree black belt and a former MMA world champion. He has also earned an MBA and is a Board Certified Pastoral Counselor with a focus on PTSD.

Chad and Kathy have been married for over 20 years and have three children.

The Mighty Oaks Foundation is committed to serving our nation’s military warriors and families by providing intensive peer-based discipleship through a series of programs, outpost meetings and speaking events. The foundation’s Mighty Oaks Warrior Programs host men’s, women’s, Mentorship and Marriage Advance Programs at multiple locations nationwide. The warriors who attend are fully sponsored for training, meals and lodging needs to ensure that upon arrival to the ranch, each is focused solely on his or her recovery and identifying their purpose moving forward.

The Mighty Oaks leadership team has the unique ability to connect with the warriors and their families. Since all instructors are program alumni, they each have experienced tragedy and hardships through their service to America. Having endured deployments, family separations and learning to handle the effects of Post-Traumatic Stress (both at war and at home), the instructors are able to connect to the students on a peer level, opening a forum that is not found in clinical environments.

The foundation began as a grass roots ministry out of Woods Edge Community Church in Texas and is a story of God’s transformational power to turn tragedy to triumph. It’s a journey that began with one man’s brokenness after combat, one woman’s willingness to fight for her family, their faith in God’s promise that we can rise from the ashes and be mighty oaks of righteousness (Isaiah 61:3) … and the obedience of a team’s bold actions afterwards to pursue God’s call.

“Our American warriors are the best the world has ever known, their commitment to being the Guardians of our Republic is exceptional. However, there are times when these men and women are in need of support. “An Unfair Advantage” is the personal story of one Warrior, US Marine Special Operator and Force Reconnaissance member, Chad Robichaux. Chad is the pure embodiment of a modern day Spartan, and he has the resume to prove it from the battlefields of Afghanistan to the ring of combat as a Mixed Martial Arts (MMA) champion. However, the outward Warrior hid an inner pain, a hurt that could not be filled with the prescriptions of the secular world. Chad tried wordly means to heal himself from Post Traumatic Stress, and failed. This walking man of steel was being weakened by the kryptonite that almost ended his marriage, and his life. Then Chad found the real antidote, the power of Our Lord and Savior Jesus Christ with whom we can do all things. Chad’s victory led him to establish the Mighty Oaks Warrior Foundation that heals Warriors with the blessings of allowing Jesus Christ into their lives, and they have not lost a Warrior. “An Unfair Advantage” is a must read to give evidence of the real battle, the unseen enemy our troops face. Yet, regardless, it gives witness that the full armor of God is the best means by which our Warriors can win on the spiritual battlefield. It is not about another policy, just trusting in a Savior who has overcome it all…John 16:33.”

MEMBER OF THE 112TH US CONGRESS

To book Chad to speak for your next event, get in touch with us using the form at the bottom of this page. Or, email us with the details of your event and we’ll be in touch! 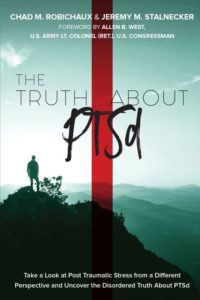 New Book:
The Truth about PTSd

Though trauma is not exclusively a combat issue, the War on Terror has put a spotlight on PTSd. Our responses to the abnormal events of trauma were designed to help humans survive and protect themselves… that’s not a disorder, but a blessing.

The question is, with the mountain of valid research compiled on Post Traumatic Stress, how do we move forward?

The answer is found in understanding how we’re created. There is hope and freedom on the other side of trauma, but not until you understand some essential truths that will make that freedom possible.

Other Books by Chad Robichaux