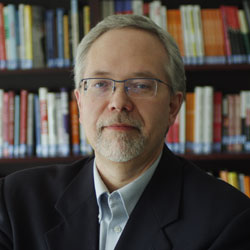 A scholar in the fields of Biblical Studies and the Ancient Near East, Dr. Michael S. Heiser is a Scholar-in-Residence at Faithlife Corporation, the makers of Logos Bible Software. Heiser studied at Dallas Theological Seminary, has a master’s degree in Ancient History from the University of Pennsylvania, a master’s in Hebrew Studies and a PhD in Hebrew Bible and Semitic Languages from the University of Wisconsin-Madison. He has published hundreds of essays and peer-reviewed papers in scholarly journals and popular periodicals such as Bible Study Magazine.

He has taught at the collegiate level for well over a decade, specializing in the Hebrew Bible, Northwest Semitic languages (biblical Hebrew, biblical Greek, Syriac, Aramaic, Ugaritic, Egyptian, Akkadian, Sumerian, Phoenician, and Moabite), biblical theology, the history and religions of the ancient Near East and Second Temple Jewish literature.

“If you liked the phenomenon that is Stranger Things, you’ll love how biblical scholar and fan of the series Michael Heiser draws out its meaning and application to our own lives in a way that aligns with Scripture. You can’t get enough of the nostalgic entertaining series and you can’t get enough of Heiser’s loving exploration of it.”

“A fascinating book … Heiser explores corners of the gospel we rarely think about very deeply. Fans are in for a treat, but all readers will have their eyes opened to reflect on the depth of the beauty and grace that is salvation.”
—Darrel L. Bock, Executive Director of Cultural Engagement and Senior Research Professor of New Testament Studies, Dallas Theological Seminary

“The gospel is much more than a new philosophy of life! Even those of us who didn’t watch Stranger Things will still profit from this summary of its redemptive parallels, as they illustrate the Christus Victor dimensions of the gospel. This fun read will grow your delight in God’s gospel working.”
—Gerry Breshears, Professor of Theology, Western Seminary The World Turned Upside Down: Finding the Gospel in Stranger Things

The paranormal television mega-hit, Stranger Things taps into the mysterious elements that have fueled spiritual questions for millennia. The otherworldly manifestations in Hawkins, Indiana offer compelling portrayals of important spiritual truths–many of which are echoed in the supernatural worldview of the Bible.

In The World Turned Upside Down, Heiser draws on this supernatural worldview to help us think about the story of Jesus and discover glimpses of the gospel, arguing that the celebrated series can help us understand the gospel in unique and overlooked ways, if we watch with the proper perspective.

Other books by this author

Angels: What the Bible Really Says About God’s Heavenly Host