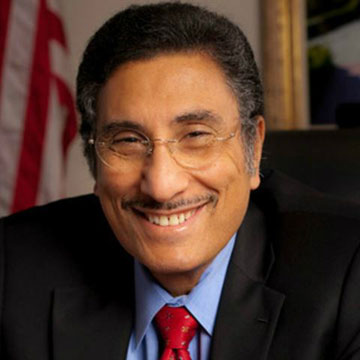 Believing that God was calling him out of Egypt, where he was born and raised, Youssef immigrated as a young man to Australia, where he studied at Moore Theological College in Sydney, was ordained as a minister and met and married his wife, Elizabeth.

The Youssefs came to America in 1977 and in 1978, Michael received a master’s degree in theology at Fuller Theological Seminary in California. He later earned a doctorate in social anthropology from Emory University in Atlanta, Georgia.

Youssef served for nearly ten years with the Haggai Institute, teaching courses in evangelism and church leadership, advancing to the position of Managing Director at the age of 31. He’d settle in Atlanta and in 1984 become a United States citizen.

Three years later, he founded The Church of The Apostles which currently serves a congregation of over 3,000 and is the launching pad for an international ministry, Leading The Way with Dr. Michael Youssef. LTW, through radio and television programs, the internet and through books, periodicals, and other resources, is translated and broadcast into 20 languages, in over 200 countries around the world.

A national columnist and author of 30+ books, including Blindsided: The Radical Islamic Conquest and The Barbarians are Here: Preventing the Collapse of Western Civilization in Times of Terrorism, Youssef is one of the country’s foremost experts on radical Islam, the Middle East, Christian faith and religious liberty. He has appeared many times on CBN, CNN and Fox News, among other national news outlets.

* note: Dr. Youssef is fluent in Arabic. Also has a studio in Atlanta with full broadcast quality uplink capabilities

AN OPEN LETTER TO THE LEADERS OF THE UNITED KINGDOM


To book Dr. Youssef to speak at your next event, get in touch with us using the form at the bottom of this page. Or, email us with the details of your event and we’ll be in touch!

Radical Islam has been waging war against our global civilization throughout history―and now, it’s closer than ever to American soil. Dr. Michael Youssef, a Coptic Christian who was born in Egypt and now leads a megachurch in America, knows from firsthand experience that radical Islamists have goals that many American Christians believe are “unthinkable.” In this book, he warns Western Christians that it doesn’t help to ignore what’s going on. There’s a third jihad underway, and its goal is to take over the West.

The Third Jihad is a call for Christians to defend their families, protect their nation, and boldly share the good news of Jesus with their communities―especially their Muslim neighbors.

Packed with surprising insights from history, compelling and dramatic stories, and a practical agenda that one person―or one church―can immediately put into practice to make a difference in the world. Rich in encouraging biblical principles and prophetic insights, The Third Jihad leads the reader to an empowering conclusion in our troubling (and even frightening) times.

Michael Youssef’s insights will inspire Christians to take their faith seriously, share their faith freely, and to truly be salt and light in a world of increasing darkness and decay.